Helping You Make An Informed Decision

What is Cystic Fibrosis Carrier Screening?

Inherited, or genetic, diseases like cystic fibrosis (CF) are passed from parents to their children. This occurs even when neither parent has the disease. For a child to inherit CF, both parents must have an altered gene that causes CF; that is, both parents must be carriers of an altered CF gene.

What is Cystic Fibrosis?

CF is an inherited disease that occurs most often in people whose ancestors come from Northern and Western Europe. In Northern European Caucasians and people of Ashkenazi Jewish descent, approximately 1 infant out of every 3,000 live births will be born with CF. People of other ethnic groups also have CF, but not as frequently. For example 1 in 8,500 Hispanic Americans, 1 in 15,000 African Americans, and only 1 in 35,000 Asian Americans will be born with CF.

People who have CF have high levels of sodium and chloride (salt) in their sweat. More importantly, a thick, sticky mucous in the lungs causes persistent coughing and wheezing as well as frequent lung infections including pneumonia. Some affected children have difficulty gaining weight even though they eat normally. These children have very low amounts of pancreatic enzymes and cannot break down food normally to extract the nutrients needed for growth. All these symptoms can be either mild or severe.

Infertility (not being able to have children) is also common in people with CF, especially in men. Although men with CF produce sperm, they are almost always born without the vas deferens, the tube that carries sperm from the testes. This condition is called congenital bilateral absence of the vas deferens (CBAVD). Since sperm cannot be carried from the testes, these men don’t release sperm during sex and, consequently, are infertile. CBAVD may occur in men who don’t have other CF symptoms as well as in those who do. Many women with CF, on the other hand, are able to have children even though some have reduced fertility.

Although CF is not curable, there are some treatments that greatly increase the life span for patients with CF. For example, digestive problems are often treated with special high-protein, high-calorie diets and vitamins. In addition, capsules are taken at each meal to replace the missing pancreatic enzymes. Lung symptoms are treated with physical therapy that can sometimes clear the mucus from the lungs. Antibiotics and other medications are also used. Despite treatment, half of the people born with CF die by the age of 37 years, primarily from lung disease.

What is a Cystic Fibrosis Carrier?

Who should have Cystic Fibrosis Carrier screening?

This is a decision that you, your partner, and your doctor must make. Carrier screening is offered to:

Men with CBAVD (see previous section: “What is cystic fibrosis?”) often are carriers for, or have, CF. Since these men can still father children by having a special medical procedure in which sperm are removed directly from their testes, they and their partners may also want to be screened.

You may wish to consider your risk of being a carrier. This is based on your personal and family history of CF and the frequency of CF in your ethnic group. Table 1 lists the risk of being a carrier for various groups. You may also want to consider the ability of the test to find the altered CF genes that occur in your ethnic group as shown in Table 2 and described in the next section (“How is cystic fibrosis carrier screening done?”). Remember that carrier screening provides information about your child’s chances of inheriting CF, but cannot tell you if you will, or will not, pass on CF to your child. 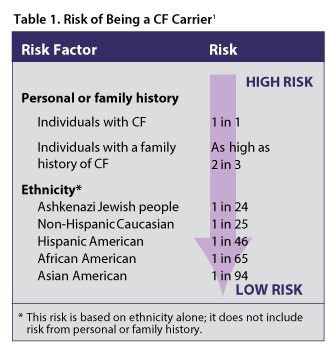 More than 1,700 changes have been discovered in the CF gene. The screening test, however, identifies only the more common changes. Thus, the test is better at finding CF carriers in some ethnic groups than in others. For example, the test can detect 88% of the changes found in the Non-Hispanic Caucasian group, but only 72% of the changes found in the Hispanic American group. Table 2 shows how well the Sonora Quest Laboratories test can find altered CF genes in each ethnic group. 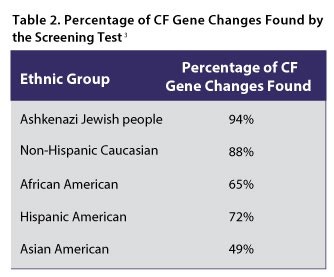 CF carrier screening is performed on a small sample of your blood. During the test, the laboratory will find out if you carry 1 of the more common changes to the CF gene. Your doctor should provide the lab with information about your race, ethnicity, and any personal or family history of CF to help with interpretation of the results.

What does a negative screen mean?

As shown in Table 1, your risk of being a CF carrier is based on your ethnic group and your personal or family history. CF carrier screening provides additional information that modifies your “pre-test” risk.

A negative screen means that the lab didn’t find any changes in your CF genes, so your actual risk of being a CF carrier is lower than your pre-test risk. You’re also less likely to have a child with CF. Since the screening test detects only the most common changes in the CF gene, a negative screen doesn’t guarantee that you’re not a carrier.

What does a positive screen mean?

The chance of this happening depends on your partner’s race and family history. Your doctor
or a genetic counselor can give you more specific information.

Remember that the risk described above will be the same for each child you and your partner conceive (that is, for each pregnancy). Also remember that CF carrier screening can only tell you the risk of your child having CF; it cannot tell you if any of your children will actually have CF.

What family planning options are available?

If your carrier screen is negative and if you do not have any close relatives with CF, you can plan your family knowing that it’s very unlikely for you to have a child with CF. This is true even if your partner is a CF carrier, because 2 altered genes are necessary to have a child with CF. Remember, however, that there is no guarantee your child won’t have CF.

If you and your partner are both CF carriers, you may want to learn what it’s like to live with and take care of a person with CF. You may also want to know about medical procedures that tell whether an unborn child has inherited CF. For example, in chorionic villus sampling, a tissue sample is obtained from the placenta between the 10th and 12th week of pregnancy. This sample is then analyzed for the changes that were found in the parents’ CF genes. In another procedure, called amniocentesis, a sample of amniotic fluid—the fluid that surrounds and protects your baby—is collected between the 14th and 18th week of pregnancy. This fluid contains cells that have washed off your baby’s skin. These cells are tested for the parents’ altered CF genes. You may also want to learn about other methods of getting pregnant, such as using an egg or sperm from a donor who is not likely to be a CF carrier or using preimplantation genetic diagnosis in conjunction with in vitro fertilization. Finally, you may wish to explore the option of adoption. Your doctor or genetic counselor can help you learn more about these options and their associated risks and benefits. The information will help you make the best decisions for you and your family.

A negative screen means that

A positive screen means that

CF carrier screening cannot tell you for sure if you will, or will not, have a child with Cystic Fibrosis. Carrier screening will, however, give you important information that will help you make the best possible decisions for you and your family.

Order Tests without a doctor's order.

Pay at Time of Service

Pay a discounted rate for many laboratory services when paying at the time of service.

Get information about various types of laboratory tests for free, courtesy of Lab Tests Online®.