The CBC – providing information about your health

The human body is primarily made up of water and cells. Many of the cells group together to form the skin, muscles, bones and organs, such as the heart, lungs, kidneys, etc. Such cells are stationary, staying in one place within the body. Some very special and important cells, however, move throughout the body by traveling (circulating) in the blood. These circulating cells provide oxygen to all of the stationary cells in the body, help fight infection throughout the body, and help stop bleeding after an injury. Information about these cells can provide important clues about the overall health of the body.

The complete blood count, or CBC, is a lab test that provides information about these circulating cells. First, a sample of your blood is collected and sent to the lab. A lab instrument then automatically counts the number of each type of circulating cell. If results from the automated instrument are outside specified limits, a medical technologist will examine the cells closely so complete information about the cells can be provided.

Results from the CBC test can help:

Reporting and interpreting the results

This brochure includes a brief description of the items included in the CBC test report. The descriptions can help you understand your results so you can have a more meaningful discussion with your doctor. Additionally, items in the CBC are summarized in the table at the end of this brochure for quick reference.

RBCs play a vital role in transporting oxygen from the lungs to the rest of the body. These oval-shaped cells contain hemoglobin, the protein that binds oxygen while it is being carried to all the stationary cells in the body (cells in the skin, muscle, bone and organs). The chemical process that converts the nutrients found in food into energy requires oxygen. All the stationary cells require energy to function; thus, they need oxygen and are dependent on the RBCs to transport it.

Hemoglobin (Hb or Hgb) is an iron-rich protein that carries oxygen and makes the blood red. Since hemoglobin is contained only in the RBCs, a low number of RBCs leads to low levels of hemoglobin. However, if there is something wrong with the RBCs, hemoglobin levels can be low even when the RBC count (i.e. number of RBCs) is within the reference range. So a CBC test report includes the number of RBCs, the amount of hemoglobin, and other measurements related to the RBCs.

The hematocrit reflects the amount of space in the blood that is occupied by RBCs. Hematocrit measurements are affected by the number of RBCs and by the size of the RBCs.

The mean corpuscular hemoglobin (MCH) reflects the average amount of hemoglobin in a person’s RBCs. RBCs with more hemoglobin result in a higher MCH and vice versa.

The mean corpuscular hemoglobin concentration (MCHC) is a measurement of the average amount of hemoglobin in the RBCs compared to the average size of the RBCs. Put another way, the MCHC is the ratio of the MCH to the MCV.

The red cell distribution width (RDW) reflects the degree of variation in size of the RBCs. Not all the RBCs are the same size; some are larger and some are smaller. The RDW measurement is affected by the size of the smallest RBC and the size of the largest RBC.

What this means to me and my doctor

In patients with anemia, hemoglobin levels are low and the patient may be frequently tired and have little energy. This is because there is not enough hemoglobin to carry oxygen to the stationary tissues; thus, there is not enough oxygen available to convert nutrients into energy. The RBC count, hematocrit level, MCV, MCH and MCHC might also be low in patients with anemia.

Low RBC counts, hemoglobin and hematocrit levels can be caused by other things too, such as a lot of bleeding or malnutrition (not enough nutrients in the food eaten). Kidney disease, liver disease (cirrhosis), cancer, and medications used to treat cancer can also cause low levels.

An increased RBC count and increased levels of hemoglobin and hematocrit may be caused by dehydration (not enough water in the body) or by some diseases (see table).

WBCs help the body fight illness or infection. As part of the immune system, they recognize and fight things that are foreign to (not part of) the body. The number of WBCs (WBC count) is lower than the number of RBCs; however, the WBCs are larger in size RBCs. There are 5 types of WBCs; each type plays a different role in protecting the body from invaders.

What this means to me and my doctor

The differential – visualizing the cells

When performing a differential, a medical technologist looks at the various cells under a microscope. A differential provides information about the relative numbers (that is, the percentage) of each type of WBC. Such information helps the doctor determine whether an illness is caused by a bacteria, a virus, or leukemia. A differential can be used to monitor patients with allergies and to determine how a patient is recovering from an illness or responding to therapy.

In addition to the cell types listed previously, certain cell types that don’t normally appear in the blood can be reported in the differential. These cells include promyelocytes, metamyelocytes, blasts, etc. Presence of any of these cells indicates a need for follow-up with your doctor.

Platelets are the smallest blood cells. They are an important part of blood clotting. These small cells clump together and form a sticky mass that helps the blood to clot. Blood clots help your body handle injury by stopping or preventing bleeding. Blood clots can also cause problems, however, when they occur within the blood vessels or the heart; such clots cause a blockage known as thrombosis.

A CBC includes the number of platelets and the mean platelet volume (MPV). MPV is a measurement of the average size of the platelets. A higher MPV roughly indicates better platelet function. Some medical conditions are associated with a high MPV and some are associated with a low MPV. Thus, the MPV can sometimes be helpful in telling apart different disorders.

A decreased number of platelets (thrombocytopenia) is associated with bleeding. Some causes include certain rare inherited disorders, leukemia, autoimmune disorders (e.g., rheumatoid arthritis or lupus) and medications. A falsely low platelet count, which is not associated with bleeding, can be caused by a rare error in blood sample collection: instead of staying in a liquid form, the sample clots (becomes solid), thus using up the platelets.

An increased platelet count is less common and is associated with clotting disorders such as thrombocythemia. Platelet counts can also be increased in some cancers and following infections or other medical conditions.

Aspirin can decrease the platelet function, so it’s important to consult with your doctor when taking large amounts of aspirin or when taking aspirin for an extended period of time. Many over-the-counter medications contain aspirin, which may be listed as acetylsalicylic acid, salicylate, or 2-(acetyloxy) benzoic acid. 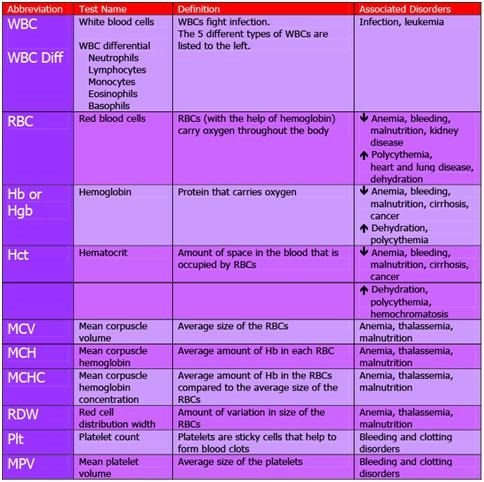 Order Tests without a doctor's order.

Pay at Time of Service

Pay a discounted rate for many laboratory services when paying at the time of service.

Get information about various types of laboratory tests for free, courtesy of Lab Tests Online®.